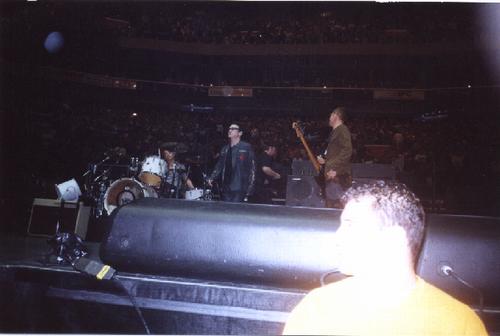 Comments :Add comment
From: ??? on 2002-05-15 04:06:18
Someon is lacking from this picture and look how angry it made this security man!! He losts his face!!!
From: kat on 2002-05-15 14:22:59
coooeeeeeeee!!!!!! edge where have you gone?? i bet it was you that took the security guys face wasn't it?? that is very naughty, auntie triple will have to tame you if you carry on like this!!!!
From: soul cat girl on 2002-05-16 03:52:21
Triple you are at this very minute aging rapidly ....you have somehow become Edge's auntie and turned upside down spinning rapidly on the crown of your head like a flash from the past ...*big crash noise*....where once sat Triple ? at her boring old desk picking her teeth with a led pencil there now stands proud as any gladiator atop her desk in a leopard g-string and sparkling pasties the one and only TRIPLE ?H? the wrestling chick gorr-Hilla!....good gawd! ..she's a Hunk of kick ass U2 luv but alas I guess that means noooo more hanky panky with Edgymon in the bubble bath hot tub!!!!! gorr-Hillas just hate water they never go near it..pheeew!....say Kat why are there bubbles dribbling out of the corner of your butt cheeks and dripping from your ears? Noooo say it isn't sooooo Auntie Em !!! Huh OH guess who's taking your place in the ol' bubbly hot tub party spot Triple ?H?....? A kitty kat with a secret edgy thing... Some times you snooze you lose and in this case your on to a bigger and better and much higher causes...what that is exactly we don't know for sure but don't worry Triple ?H? your definately here to save the day ...maybe even the faceless guys identity ( could he be the phantom of the opera with out his cape?) but definately your here to save Edgy from Kats evil eyeballs glaring at him just barely over the top of the water level as she growls bubbles at him and also at Larry while he's strolling cool as can be but fast then faster to get away from the hot tubs funky kat action.....hahaha ....don't say WHAT?.....grrrr....boy that was fast jabbering don't know how its going to end.......I gotta go my launch helecopter's on its pad waiting to crash but not before I climb on board !!!!!.*teeth chattering*...fear of flying 101....grrrrr
From: ??? on 2002-05-16 04:42:14
WHAT?Have you lost your mind soulie? Leopard g-string?? Never!!! It has to be zebra !!And I have stepped out of the hot tube way ago, all that hair floating around there, made my skin itch.. of course later I realised it was the hair growing on me, that caused it, but it was too late.. the tube is crowded now, with fuzzy, black hair and a huge mansion that doesn't know what the word home means..And the saving days are over too, they got drowned in some Irish Coffee, together with Glam Queen, the rescue gal.. poor poor thing.. *shaking head*.. she was absolutely devastated of the wedding news and the house news.. that was the final thing.. poor Glam Queen, may she rest in peace..And make room when the Game beginns!! Haahaahaaa.. Triple ?H? will show you people what happens to M people messing around her bunny!!! First they need to wear Kats green PVC suit in public, then they will need to get up on stage and get their arses kicked!! Hell in a Cell!!And they will have a taste of Triple ?H?'s smooth move that makes them cough up hairballs, Kittygree!!Yes, and they will leave the Arena coughnng and coughing and crawling and mumblin for Triple ?H? to be the undisputable love of Edge's life!!! The game has begun!!
From: ??? on 2002-05-16 08:21:18
What?Kat is in the tube?? With barely eyes showing, as she stares at my bunny?? What?? Oh no, Soul Cat, she is not wearing the green PVC suit, so she must be on my team.. and I'm sure she is actually peeping at the M person, because the M person doesn't look nearly as hot in that suit as Kat does, and she is just waiting to get up and.. to do what?
From: kat on 2002-05-16 14:04:57
aw, me and my funky action get a bit ahead of our selves at times!! well, i look a really glamour 'puss' in my fab new catsuit, where as lady 'M' (uck!) looks like a mouldy sack of potatos.... she better not get in the hot tub, or it will be boiled potatoes for lunch!! nonono soulie the bubbles are actually coming out of my eyes cos the got stuck behind my new glow contacts..... nonono again triple i was not in the tube!!!! (i know what you meant, but being in the tube looked a bit dodgy from over here!!!) i was actually traveling on the picadilly line to covent garden, cos i had just swan over from ireland, after seeing such an ungraceful thing as 'M' in a cat suit!!!