Another Time, Another Place: The Boy Tour Retrospective, Part III

Now that we know the general look of the set it is time to try and fill in those blank spaces. Of the 155 concerts we believe a total of 60 are complete; that comes to just under 39%. Shorter complete sets are generally when U2 were the opening act while the longer sets tend to line up with when they were the headliner. Consequently the earlier complete sets were generally no more than 12 or 13 songs while later performances sometimes reached as many as 19 songs.

Most of the blanks come from the first two legs where at least half of the sets are unknown. This is markedly improved from the third leg onwards. The key to our attempt to fill in those blanks is the consistency on the nights we do know what was played.

Remember that this is speculation on our part, but we believe it is fairly accurate. What is the basis for our guesses? Well, we aren’t as good at making tour set charts as our friend Mark Peterborough but we’ve tried our best in Excel to illustrate what we know from our database to help visualize any patterns. We haven’t included “Carry Me Home”, as it is highly unlikely it was performed more than the two times we know of, or the two covers.

Let’s start by comparing all the complete sets: 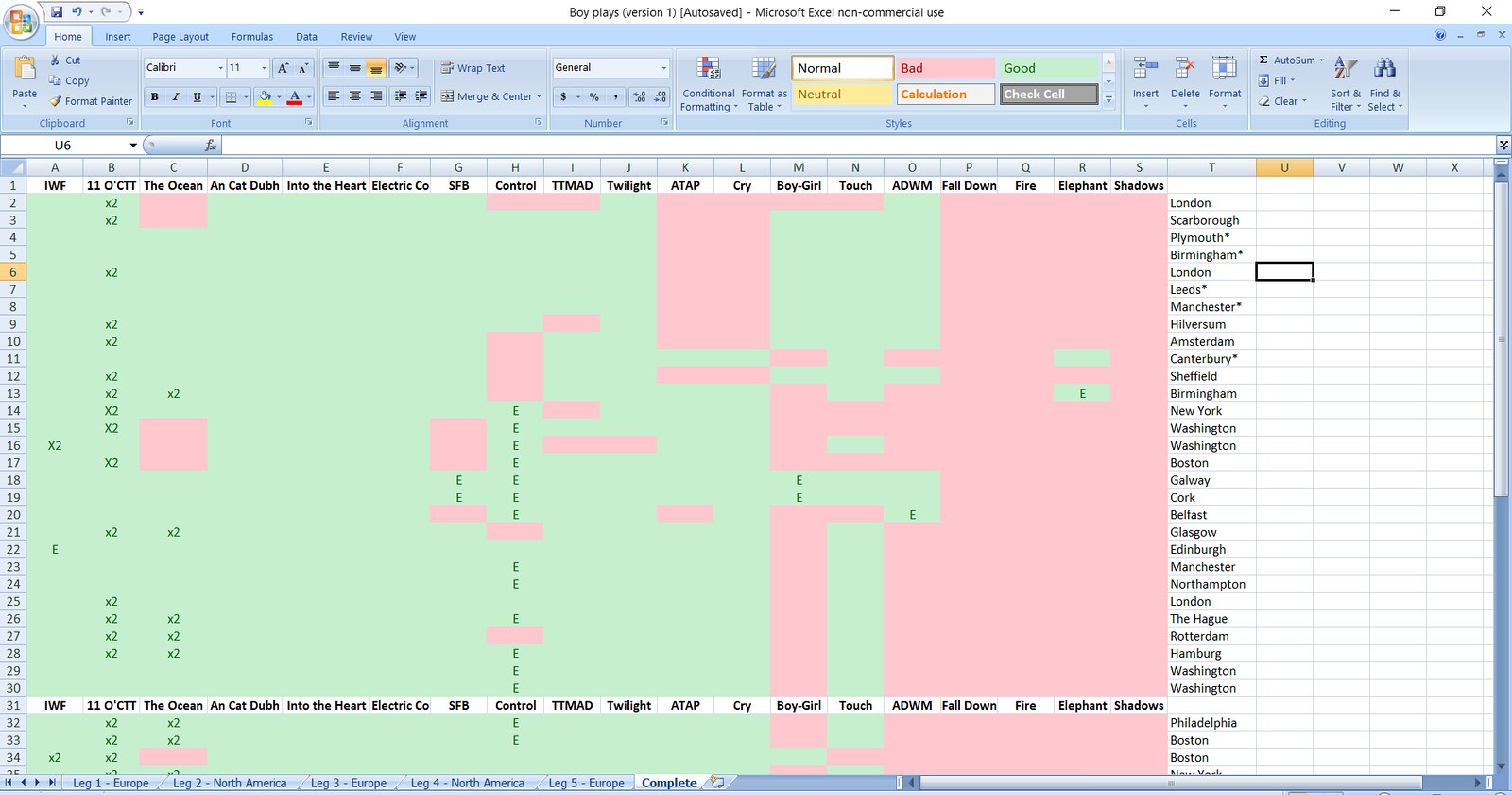 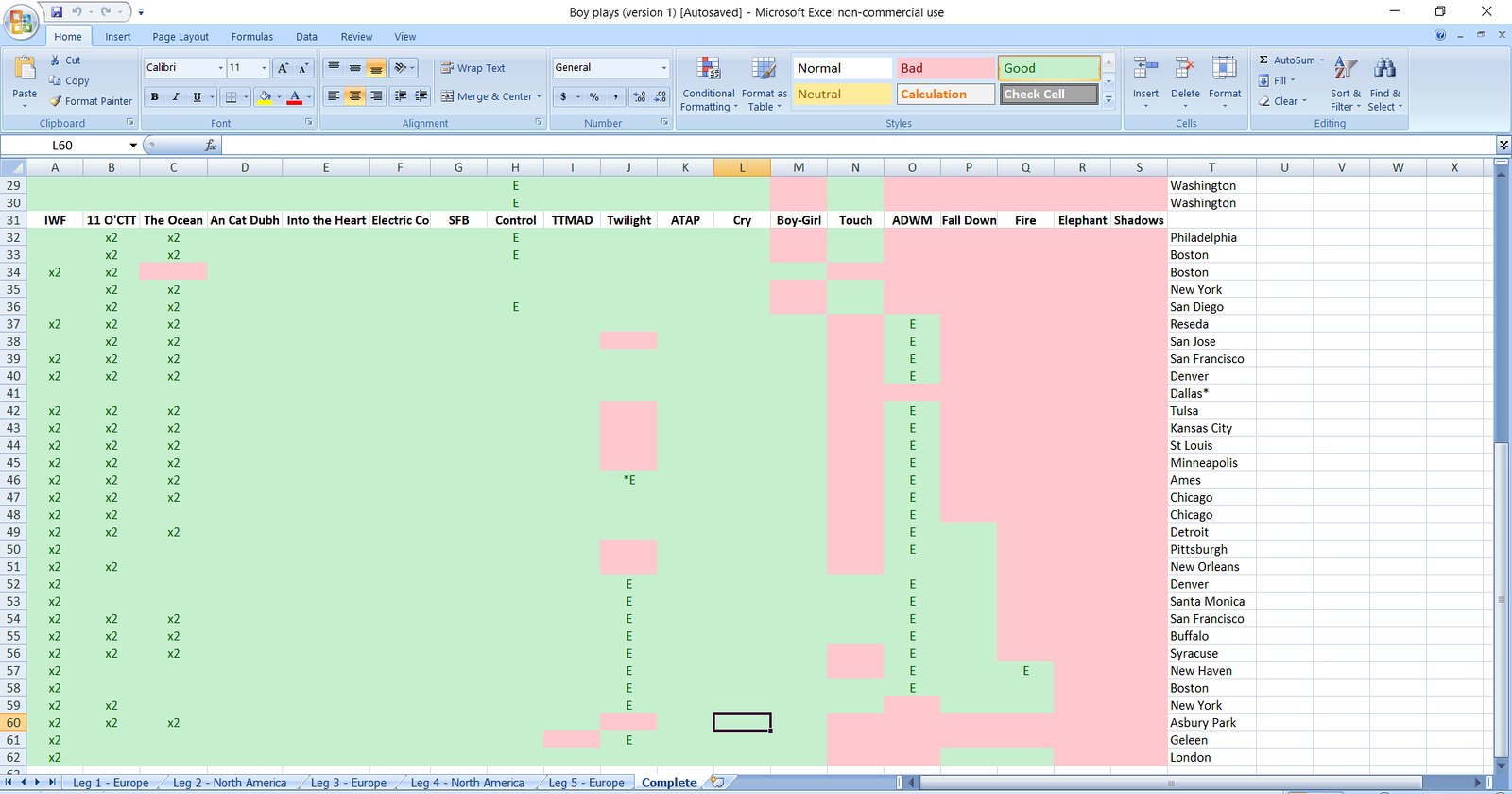 These 60 concerts represent 38.7% of the tour, an amount low enough that any data analysts will likely start frothing from the mouth. However it is enough to give us a general overview that we can determine quite a few things...

It is interesting to look at “11 O’Clock Tick Tock” and see that it was played twice at a fairly consistent rate throughout the tour. In comparison the other repeated songs, “I Will Follow” and “The Ocean”, were much heavily weighted towards the backend of the tour. This correlates with the length of the sets, which grew in size leg-by-leg. With a lack of song choices to pull from they had to go back and choose more songs to repeat. “I Will Follow” in particular was a natural choice with its energy and popularity.

Despite being the lead single, “A Day Without Me” really struggled to find a home in the set compared to its sister release. During the first leg it regularly followed “Into the Heart”, a spot it lost to “Another Time, Another Place” when that song made its tour debut. It looks like they alternated between the two for a short time to figure out the better sequence and went with “Another Time, Another Place”. Where one is marked in green the other is red, and vice-versa. “A Day Without Me” only rejoined the set when U2 added it to the encore towards the end of the tour; we only know of two times when both were played in the main set prior to that.

“I Will Follow”, “11 O’Clock Tick Tock”, “An Cat Dubh”, “Into the Heart”, and “The Electric Co.” were performed at every concert on the tour. Perhaps the biggest surprise in that list is the absence of “Out of Control”, nowadays considered one of the two or three most quintessential tracks from the album. This isn’t because of just one or two omissions either, it seems like U2 really struggled with finding a good place for it towards the end of the first leg. Again, it seems like the encore was the saving grace for the song through the second and third legs.

The long streak of red on the far-right shows that “Shadows and Tall Trees” never had more than a handful of appearances, even during the earliest part of the tour. Bono has commented that they would repeat songs because they ran out of material, but it seems this song was never really considered an option. It is the most unusual song on Boy, and the poignant introspection of the lyrics make it more suited for Songs of Innocence several decades later. It is one of the earliest, if not the first, instances of Bono inserting himself directly into the lyrics and talking about his perspective of the world. “Shadows” only works on Boy because it is the album closer. It is a fascinating early look into his young mind, but the heavy nature of the lyrics made it ill-suited alongside the other songs in a live setting. It could certainly have been used to close a concert, but such a somber finish to the night clashes with the exuberant youthful energy of the rest of the set. It is no surprise that “11 O’Clock Tick Tock”, “I Will Follow”, and “Out of Control” were regular choices for that role instead.

It’s clear that from the moment it debuted the band were quite taken by “The Cry”. It was played at every concert we know of bar one following that first performance; there may have been a few more, but we will look at that in more detail in a bit. “Father is an Elephant” debuted the same night as far as we can tell, but unlike its fellow unrecorded song it did not stick around. U2 seem to have had some confidence in it, even recording it during an (unaired) BBC radio session, but it was lost to time soon after and was not played after the first leg.

That’s 38% of our analysis for these 38% known complete concerts of the tour. Yes, we know we haven’t mentioned “Twilight” yet (sorry Harry), but there is a method to our madness. That song, along with “Touch” and “Boy/Girl”, is one of the harder tracks to pin down because of multiple absences throughout the tour. To really discuss these, and the rest that we haven’t yet touched on, we need to look at the incomplete and unknown nights too.