Direct from the last of three Sydney shows, a message at the start of I Still Haven't Found What I'm Looking For from Bono to everyone who thinks U2 are close to calling it quits: "Three nights, never been done before, never be done again. Do they think we're not coming back?" U2 were in a jovial mood for their last Sydney concert, and at the start of Elevation, Bono announced that although he sung last night with Kylie Minogue (he sung a duet with her of the Minogue and Robbie Williams song Kids), tonight "we're all yours". The show included the first performance of Mysterious Ways on the Australian leg of the tour, the first I Will Follow since 12 February 2006, the first Party Girl since 22 October 2005, and Angel Of Harlem moved from the encore to the main set while Until The End Of The World did the opposite and opened the encore. The performance of Party Girl was so disorganised that it made the performance of Desire at the previous show seem perfect, but it was immensely enjoyable and Bono even popped champagne at the end. 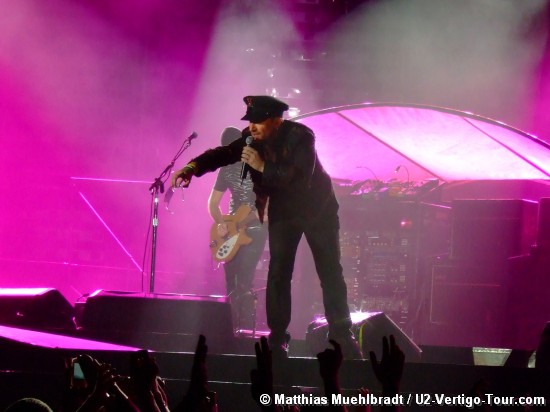