U2 have now moved from the Pacific Coliseum to the Rogers Arena in Vancouver. Today they were able to rehearse, and we also have additional news on past rehearsals.

However, before we get to that, we would like to acknowledge the passing of Larry's father, Larry Mullen Senior, at the age of 92. RIP.

Another item of news not related directly to rehearsals is that Live Nation have confirmed there will be no opener. Whether this will significantly affect the length of setlists remains to be seen, but it may afford U2 the opportunity of showcasing more material from their back catalogue.

Now on to rehearsals.

Fans have begun to queue outside the venue already. Our friend Stefan has sent some photos - two are below and you can view the rest on our Twitter: 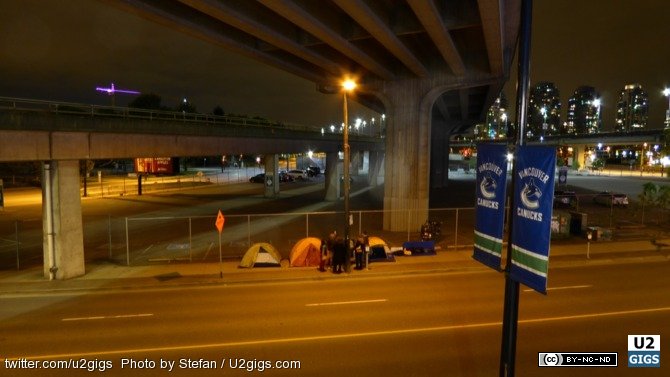 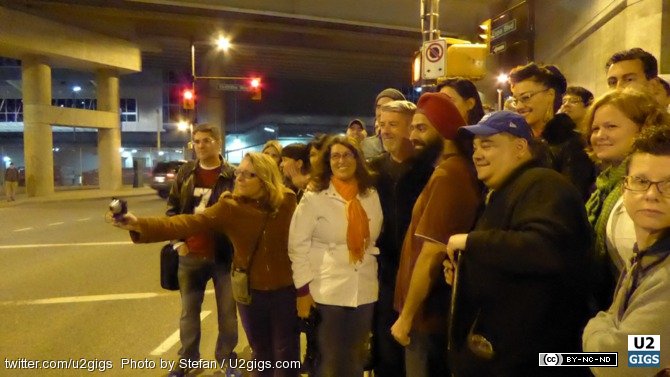 The band ran through a number of songs today, but there do not appear to have been any surprises. Thanks to this post on Interference by Pepo and various tweets on Twitter, especially those of Joe Ahorro and bethandbono, we can list the songs the band practiced.

We do not have a precise running order, but we can piece it together and make some guesses. So with that caveat in mind:

They then began rehearsing a song, possibly One, but then stopped.

We understand there will be another dress rehearsal gig tomorrow. If you missed the news about the first dress rehearsal, you can catch up here (and, for those of you up to speed, we have received confirmation that the snippet of The Hands That Built America was at the start of The Troubles, not during Bullet, so the setlist has been amended to reflect this). We also have some bonus news about previous closed rehearsals.

U2FanPeter has for the past fortnight posted excellent, reliable updates on Interference about the rehearsals at the Pacific Coliseum. We shared everything he posted publicly, and now have permission to publish rehearsal setlists he shared with us privately. We would like to take this opportunity on behalf of fans worldwide to express our gratitude to Peter for his detailed updates - Vancouver, buy this man a beer or ten.

First, the proceedings on 27 April, about which we originally reported here and more here. Those articles contain some details that won't be reproduced below; the extra information is primarily the running order.

U2 then took a ninety minute break and returned around 7:30 for a lengthier set:

1. Invisible
2. Invisible (again; extensive testing of Edge's effects and the drums)
3. City Of Blinding Lights
4. Even Better Than The Real Thing
5. Desire / Not Fade Away (snippet) (full electric version with guitar solo by Edge)
6. Pride
7. Every Breaking Wave (acoustic)
8. Bad
9. Bullet The Blue Sky
10. One Step Closer
11. Miracle Drug
12. One (mostly just Bono and Edge, leaving room for strings; full band comes in for final coda)
13. California
14. With Or Without You
15. The Troubles (taped vocals from Lykke Li)

We originally described the next night's rehearsals in this article. At 6pm, the band rehearsed for about 80-90 minutes.

1. Invisible (like the previous night, extensive testing of guitar and drums)
2. Even Better Than The Real Thing
3. Desire
4. Mysterious Ways
5. Pride / Stop In The Name Of Love (snippet)
6. Every Breaking Wave (acoustic)
7. Bad (with unidentified snippets)
8. Bullet The Blue Sky
9. Running To Stand Still
10. City Of Blinding Lights
11. The Troubles
12. Miracle Drug
13. Where The Streets Have No Name
14. Ordinary Love (Bono and Edge acoustic)

There was a shorter rehearsal this day at around 7pm:

1. Invisible
2. Even Better Than The Real Thing
3. Desire
4. California

Our source had to leave after California, but came back a bit later and heard two more songs: With Or Without You and Ordinary Love.

This evening had an extensive rehearsal. There was a short session early in the evening around 6:30pm:

Edge then fiddled with the guitar parts of Miracle Drug for another ten minutes. After a dinner break, the band returned for a lengthier set:

There was a short break, and then the band continued around 9:30pm:

13. Invisible
14. Even Better Than The Real Thing
15. Mysterious Ways / Burning Down The House (snippet) (Larry was on bongos at the start)
16. Ordinary Love
15. Every Breaking Wave (acoustic)
16. Bullet The Blue Sky
17. The Troubles
18. City Of Blinding Lights
19. Beautiful Day
20. Miracle Drug
21. Fields Of Gold (snippet) / Where The Streets Have No Name
22. I Still Haven't Found What I'm Looking For

List of all songs confirmed to have been rehearsed

Let's conclude with a list of songs known to have been rehearsed across all sessions in Vancouver. We should issue a mea culpa: Volcano should not have been in our earlier lists. It was played over the PA by the band's crew, but we have had no more solid confirmation that it was played than one report early in the rehearsals period that the band did "everything" from Songs of Innocence. We are only counting songs cited directly, so it has been removed from our list.

New songs: California (There Is No End To Love), Cedarwood Road, Every Breaking Wave (full band and acoustic versions), Invisible, Iris (Hold Me Close), The Miracle (Of Joey Ramone), Ordinary Love, Raised By Wolves, Song For Someone, The Troubles.

Old songs: Angel Of Harlem, Bad, Beautiful Day, Bullet The Blue Sky, City Of Blinding Lights, Desire, Elevation, Even Better Than The Real Thing, I Still Haven't Found What I'm Looking For, I Will Follow, Magnificent, Miracle Drug, Moment Of Surrender, Mysterious Ways, No Line On The Horizon, One, One Step Closer, Out Of Control, Playboy Mansion, Pride, Running To Stand Still, Sunday Bloody Sunday, Sweetest Thing, The Electric Co., The Fly, The Ground Beneath Her Feet, The Hands That Built America, Tryin' To Throw Your Arms Around The World, Until The End Of The World, Vertigo, Where The Streets Have No Name, and With Or Without You.

Total songs confirmed to have been rehearsed: 42.