A collection of tour news

Today we have a lot of news to run through on a range of topics related to the tour. First, everybody's favourite YouTuber of the week has provided another audio clip from U2's rehearsals - with a surprising phone call beforehand. While you read the rest of this article, enjoy City Of Blinding Lights:
Rehearsals on 13 May

U2 rehearsed during the afternoon and early evening before the tour's first show. We understand the band were at the venue for at least 2-3 hours, but only know of limited rehearsals. Thanks to some posts on Interference (starting here), we know that U2 ran through Mysterious Ways, Bullet The Blue Sky, The Hands That Built America, and The Troubles.

Update to rehearsals on 12 May

Peter has given us a little extra information to add to yesterday's report. Bono has finally busted out the harmonica during Desire, and it appears he was on a mini upright piano on the "e" stage for Sweetest Thing.

Update to rehearsals on 5 May

A few days ago we posted full rehearsal setlists for a number of evenings at the Pacific Coliseum. Peter has kindly provided some extra information. First, on the 29th, U2 also did With Or Without You and Ordinary Love, which we have added to the older post. Second, he provided a corrected set for 5 May, which we originally reported here. The set played was:

1. No Line On The Horizon
2. The Fly
3. Moment Of Surrender
4. The Ground Beneath Her Feet
5. Tryin' To Throw Your Arms Around The World

All five were performed in acoustic format by the whole band. Bullet The Blue Sky and Angel Of Harlem were also rehearsed that evening; any further rehearsals are unknown.

- The first half of the show will be played on the main "i" stage, and the second half on the "e" stage at the other end of the arena.
- Edge says the band plan on playing 24-25 songs a night.
- He also says have some sixty songs to choose from. So far we have confirmed that at least 42 have been rehearsed. He explicitly namechecks The Ground Beneath Her Feet, which he says (or perhaps the journalist puts words into his mouth) they have never played before; it was actually performed 33 times between April 1999 and August 2001.
- The band have decided to continue the tour in the wake of the death of Larry's father, as that is what Larry wants and it will be cathartic.

Those Irish Times articles also give a bit of an update on the Dublin situation, which despite persistent rumours remains unresolved. Apparently the reports of U2 playing the 3Arena in December are untrue, but that doesn't rule out either playing that venue or in the city more generally. Edge says that U2 will perform in Dublin, but that they cannot bring this tour's full production to the 3Arena as it simply will not fit - but they will still work out something to perform at the 3Arena. They just have not yet decided what that will be or booked anything. Edge flags the possibility that the Dublin shows may be acoustic.

Finally, our friend Stefan has taken photos of the tour merchandise, which is already for sale outside the Rogers Arena. So if you want to get an idea of what's for sale, head over to our gallery. 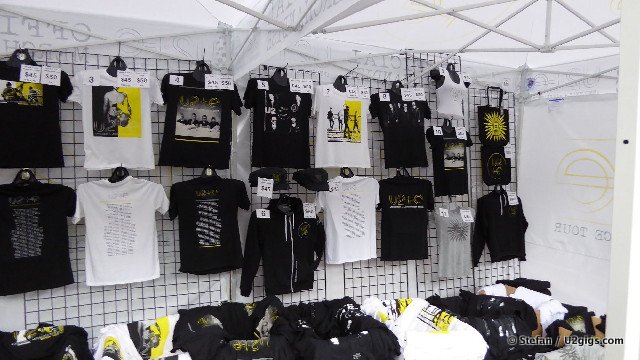