Today, after a two day break, U2 performed their fifth and final show at the Forum in Inglewood. During the soundcheck the band rehearsed The Troubles, Volcano, Ordinary Love, and The Miracle, and a souncheck setlist also lists No Line On The Horizon - though we have not confirmed if anybody outside the venue heard that song being run through. Volcano and Ordinary Love were yet to be performed on tour, The Troubles had only been done once, and nothing yet from the No Line On The Horizon album has appeared. 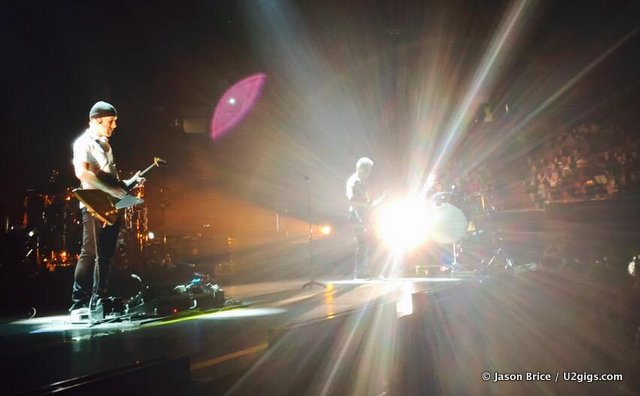 In the first set, Out Of Control returned after an absence of two shows, but otherwise no changes were made. In the second set, Volcano and Ordinary Love both had their tour debuts. Volcano has only been performed live once before, on 21 October 2014 for Jools Holland's show; Ordinary Love has appeared three times, most recently at the funeral of Irish DJ Tony Fenton on 16 March 2015. Late in the second set, The Troubles returned after a nine show absence; it had not been performed since opening night of the tour. During the encore, One was performed to close the night and the LA residency, returning after an absence of three shows.

Before Every Breaking Wave, Edge had piano problems so Bono filled in the time by talking to the crowd. He promised one fan that The Crystal Ballroom will be performed by the end of the tour, and spoke of his joy in Ireland's successful referendum for marriage equality after spotting a "Lesbians for Bono" sign ("Bono is for lesbians!" he replied). He then pulled an Elvis Presley impersonator on stage, who sang part of Can't Help Falling in Love and led the audience in singing the title line.