On June 7th, a unique concert event took place in Rostock. With the G8 summit just around the corner in Heiligendamm, the largest NGOs and popular musicians joined forces to speak out against extreme poverty around the globe. Bono was there to perform a couple of songs with other artists. 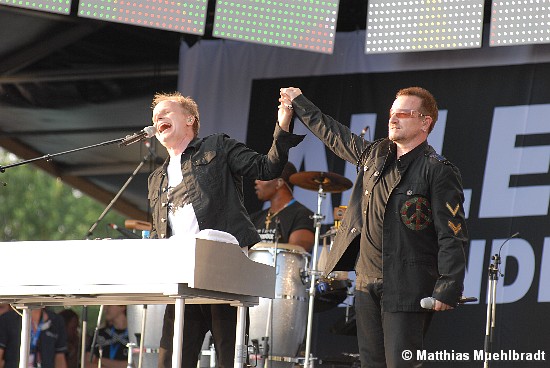 We posted quite a few of our photo to our gallery. Click the image above to see them all.

Photos of other artists at the concert can be found here as flickr set.

You Never Give Me Your Money / Carry That Weight (The Beatles)
Bono, Bob Geldof, Youssou N'Dour, Campino

The six-hour concert started at 2 pm and was broadcast in full length on German TV. Each band played two songs, and in between musical performances, speakers from different countries took the stage to make their point: Indian women's rights campaigner Vandana Shiva, Nobel Peace Prize Winner Mohammed Yunus from Bangladesh, journalist Salomao Monyana from Mozambique, Kumi Naidoo, spokesman for the Global Call to Action Against Poverty (GCAP) from South Africa, Paulino Guarachi Huanca from Bolivia, Magret Kawooya from Uganda, Bishop Toribio Porco Ticona from Bolivia, women's rights campaigner Flor Martinez from Nicaragua, Theary C. Feng from Cambodia and peace researcher Charity Musamba from Zambia. Moderators Roger Willemsen and Sarah Kuttner guided the audience through the show and presented authentic films from the P8 (poor eight) countries. They were recorded by the local people themselves and told of their lives and fears, but also of their courage to bring about change. The P8 countries representing poverty at the event were Uganda, Mali, Zambia, Mozambique, Bangladesh, Cambodia, Nicaragua and Bolivia.

All in all, it was a very diversified and variegated show that brought about a hopeful and optimistic atmosphere. The audience was peaceful and relaxed and there were no violent incidents.

"Deine Stimme Gegen Armut" is the German pendant of the Make Poverty History campaign. The festival was organised by Herbert Groenemeyer and VENRO, the umbrella association of more than 100 German development non-governmental organisations.