Bono and Edge on The Late Late Show

In case you missed Bono and Edge's appearance on The Late Late Show, the entire appearance has been posted by the show's official YouTube account. The video includes the live performances of "The Miracle (Of Joey Ramone)" (starting at the 20 minute mark) and "Every Breaking Wave" (at 36:30) as well as the full interview with host Ryan Tubridy. Watch below:


Our database listing for this appearance is here. Lots happened in U2 world yesterday. Catch up on the band's German radio performance and a very interesting North American tour rumour in this article, and watch footage of the live debut of "California" on Jools Holland's TV show here.

There are presently no more shows scheduled for U2. However, in September, Bono indicated in an interview that he would like to do an acoustic session for KROQ. Could some North American promo appearances be in the works for November? If the rumour about North American tour dates going on-sale late next month is true, then the band may do some performances to support the announcement and give ticket sales an extra boost. We will have to wait and see.

In the meantime, you can also check out some stills from The Late Late Show in our gallery. A couple of samples are below. 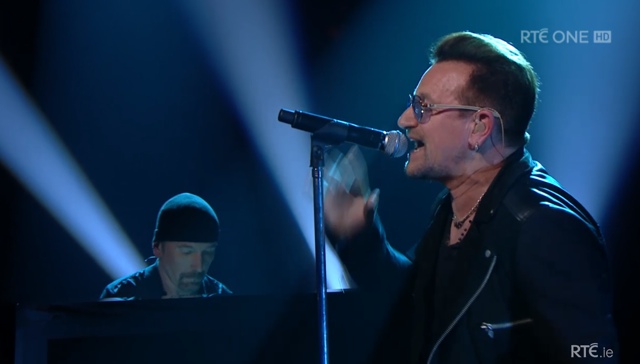