Today U2 performed their second of two shows in Turin. If you missed the opening night of the leg yesterday, you can view the set here.

Early in the show, Out Of Control rotated back into the set in the second spot. This is just the second time it has ever been played in Italy after first appearing as a surprise closer in Turin on 21 July 2001. During the second set, Desire and Angel Of Harlem both made their first appearances of the European leg; Desire had last been played at the final night in North America on 31 July 2015, while Angel Of Harlem's most recent performance came on 27 July. With Or Without You contained its extra live verse Shine Like Stars for just the fifth time this tour. At the end of the show, I Still Haven't Found was rotated into the set as the closer; like Desire, its most recent performance was on 31 July.

A group of musicians were brought on stage to perform with U2 on Desire, and the guitarist got to keep Edge's guitar. At the end of Angel Of Harlem, Bono wished Van Morrison a happy birthday (a week late!) and sang a snippet of Into The Mystic. He then spoke to the crowd about Pavarotti, as tomorrow is the anniversary of Pavarotti's death, and sang a snippet of Torna A Surriento before Every Breaking Wave. Zucchero joined U2 to sing during I Still Haven't Found.

Both October and the astonishing, stark new version of Zooropa remained in the set, the latter seguing into Streets (and, incidentally, tonight featured the 800th live performance of Streets). The end of the main set now has a very powerful and emotionally resonant theme about the European refugee crisis. The megaphone that Bono uses during Bullet is painted to resemble the flag of the European Union. 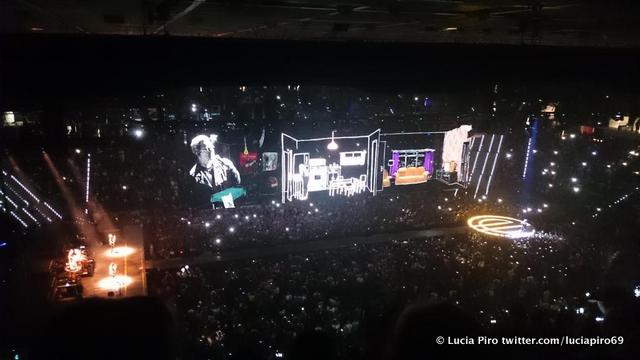