After thrilling everybody two nights ago with their performance at the Roxy, U2 returned to the Forum in Inglewood for their third regular show of a five-night stand. 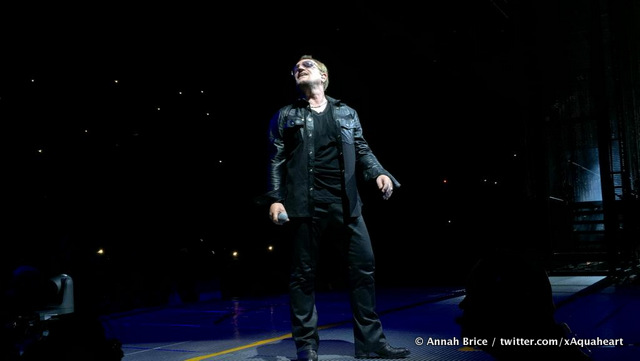 Soundcheck reports indicate that the band rehearsed Elevation, Stuck In A Moment, and An Cat Dubh/Into The Heart. There are also unconfirmed accounts of Hawkmoon 269. None of these songs have been played yet on the Innocence + Experience Tour, with Hawkmoon 269's eight live performances all happening way back in 1989. Reports of a soundcheck of The Unforgettable Fire appear to be false - a radio station played it loudly near the GA queue.

As it happened, both Elevation and Stuck In A Moment were included in the setlist tonight. This was the tour debut for both of them - although they were played at the Roxy, neither had yet appeared at an IE Tour show. They were placed in the rotational slots in the middle of the second set. Previously, the only song from All That You Can't Leave Behind that had been performed on the IE Tour was Beautiful Day. U2 have now played 35 songs across nine shows, equal to the total amount of songs played on the entire first leg of the last tour. The count in 2009 includes Happy Birthday and a couple of one-off covers, while this year all 35 are original U2 songs. If we count two songs played at the Roxy but not yet at an IE Tour show (The Ocean and 11 O'clock Tick Tock), U2 have performed 37 songs in the last couple of weeks.

The other songs that returned to the setlist tonight were The Electric Co., after an absence of one full tour gig, and I Still Haven't Found What I'm Looking For, which had not yet been played in Los Angeles this tour. It had missed three shows, with its last performance over a week ago in Phoenix on 22 May. All three Los Angeles shows so far have had a different song as closer. No city has yet had two shows closed by the same song.