U2 were in Belfast for their final concert in the city this tour. Until today U2 had never played in the city twice in a row. The last time U2 performed in Belfast more than once on a tour - or Northern Ireland in general, for that matter - was way back on the third leg of the Boy Tour when they played at Ulster Hall in December 1980 and McMordie Hall Queen's University in January 1981. The latter of those two dates was filmed by the BBC and five of the eleven songs played that night were broadcast on TV. A sixth song, I Will Follow, was later released on the 2005 iTunes exclusive video Love U2. It is the only live track from Belfast to have ever been released by the band. 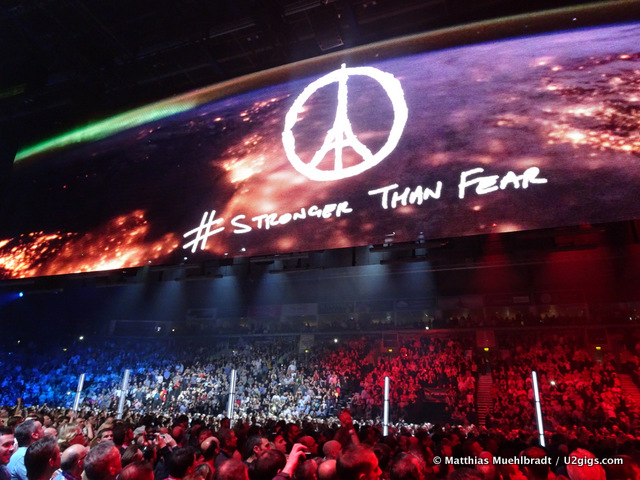 Out of Control returned to the set after missing six concerts, the longest gap for the song this tour. Desire and Angel of Harlem made it back to the set after missing three nights. For the latter, Bono pulled two young boys, Paco and Alex, from Mexico City on stage to play the song. As usual they were given the guitars afterwards. Bad and 40 also returned after a three-set absence.

Before Iris, Bono praised the people of Belfast for what they had accomplished in reaching peace. In the intro to Streets he asked Belfast to teach the world peace.

Tonight's performance of October was the 375th known rendition of the song making it the most-played song from the October album to date, one ahead of Gloria which has been played 374 known times (though when including snippets Gloria remains slightly ahead; it has been snippeted thrice while October has never been snippeted). As many October-era sets are unknown it is possible (but unlikely) that this stat is off by a few performances.

Bono included 21 snippets throughout tonight's setlist. That means it is second only to 30 October 2015 in London for most snippets in a show, falling shy of equalling that record by one. See our miscellaneous statistics page for more shows with a lot of snippets, and other assorted information.

The setlist was as follows: