Filmed a few songs as usual and will upload them asap. Matt

Wowy, moment of surrender with 40 snip, that’s it. not a bad show, better than paris. matt has videos and photos. this is ax, signing off.

Pride, mlk, walk on with you’ll never walk alone snip, streets with all you need is love snip, one, encore begins with ultra violet

Nice milkyway during One. Matt

Ax here now. breathe opening as usual. will text again at the start of the sixth song.

@WietseV it was ok with earplugs.

C’mon … my 2 beach balls disappeared after 10 seconds. What’s going on here?I might save the 2 I have for tomorrow and take them to Dublin

Gates are open since 5 minutes. 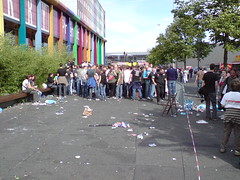 @ajut400 I think they play over a stripped down version of the Redanka remix here. It seems to have some vocals in it.

Here is the story and an interview with the fans on stage in Berlin. Too bad I can’t understand anything: http://bit.ly/13IMt4

Ax here. Matt and I at the gig tonight. Will aim to twitter set. Feels ages since Paris gigs… need to do my review of them soon, I know!

RT @U2tour Bono told fans in Berlin that U2 will play Belgium, Austria and Switzerland next year (via @U2log)

The 3 Czech fans playing Angel Of Harlem with U2 in Berlin will be in AMS as well.